With the interface installed I needed an easier way to program the settings. Having to recompile the Arduino code each time you want to change something is pretty poor.

Nothing too complicated but enough to get the job done. All the settings are stored in the EEPROM of the Arduino (atmega2560).

First thing I wanted was a simple command line interface. Worst case all you need to program the interface would be a terminal (something like Putty, TeraTerm, HyperTerminal, etc).

Being lazy its always easier to see if something already exists before you roll your own. Even if its not exactly what you want you can get some ideas. Lucky for me, with a few Google searches, I found the serial command library.

So simple, install the library, include the header, add a few lines and a few callback functions – done!

So now via the command line we can

This is enough really for the prototype – but – if you want to make it a bit easier for the average Joe to use then it’s time to a make a simple UI.

Behold – the alarm interface programming tool. Of course it looks like crap but it gets the job done. Simple operation Read the data, modify the data, and then write the data back.

Under the covers it uses the serial commands we defined earlier to to read and write settings. The hardware version and firmware versions do work but not in this early screen shot. 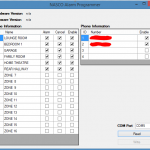 Cool – simple programming tools done – now to customize for my alarm panel and see if we get some SMS messages out!