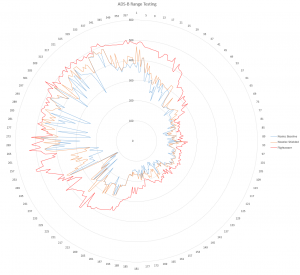 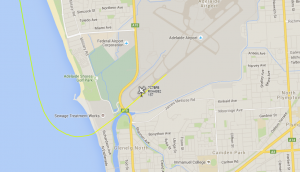 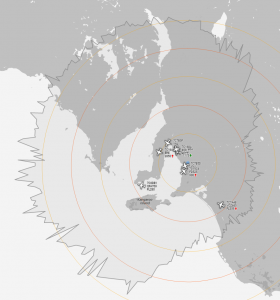 Long ago I set up and ADS-B receiver with the standard RTL SDR dongle and Raspberry Pi. It runs a combination of modesdeco2 and modesmixer2. The default web interface has a nice radar range graph, but each time you reboot the Pi the range data is gone. I have a piece of software that decodes the ADS-B stream and calculates range and azimuth data for current planes (i.e. location data updated within the last 10 seconds) among other things.

I thought I’d add the ability to save this data to a database so I can graph it and perhaps compare different setups, receivers, antenna, LNA’s and filters.

Here is the baseline graph for about a week ending 2016-04-25. My location is on the slope of a plain that runs north to south and up hill to the east. You can clearly see I have less line of sight visibility in that direction. However to the west the range is pretty good. 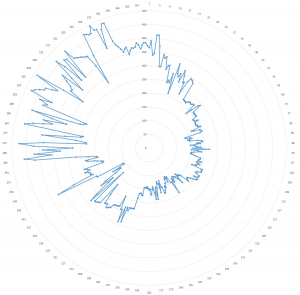 While waiting for parts to arrive I decided to try shielding the dongle with copper tape. To make it look somewhat neat I opened the case of the dongle and put the tape in the inside. The plan worked but the plastic and copper on the bottom of the dongle is quite close to the PCB so I added a layer of normal tape to the bottom of the PCB to stop shorts. The copper connects to the shield of the USB connector and the surround of the RF connector and encases the entire inside of the dongle. (I’ll add a photo of it later)

Anyways does it help with range? Perhaps, its hard to tell with ADS-B here in Adelaide as we don’t see a huge amount of traffic, and week to week variations could account for changes – who knows – anyway here is the update range graph with data up to 2016-05-06 including the baseline data. 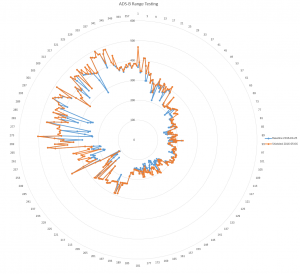 In general, a small increase in range in all directions, with a larger increase to the west, pushing out towards 500 km.

It turns out I forgot to order the new parts … too busy I guess … so it still will be a while before I get the new parts delivered and installed. In the mean time the shielded dongle has been running for almost a month so we can now get an updated range graph. It generally shows the same as the last update but this time you can see the improvement more easily.  For reference I’ve include my current modesdeco2 range so you can get an idea of the area around Adelaide I can see. 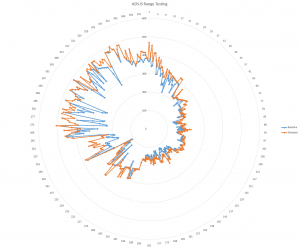 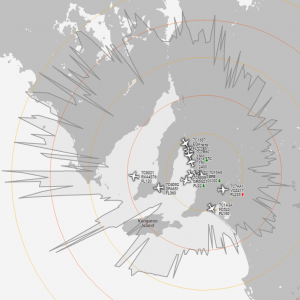