Over the last few years another obsession has been low voltage wall  switches The requirements for a DIY home automation wall switch sounds simple enough.

The idea was to connect this switch to an CAN Input Module (switch) and CAN Output Module (LED) and then use the CAN messages to “do stuff” like turn on lights, etc, etc

I spotted these WattStopper LxS switches after a lot of searching the web. I ordered one of L5S ones to experiment with – tricky in itself to find somewhere to order it from that would deliver to Australia. It has 4 thin buttons and 1 larger button, momentary, and a single LED for the 4 thin buttons. So almost a match for the requirements and the closest I have found so far. 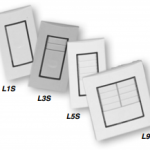 The switch did not suit hooking up to my input/output modules directly. With all the redesigns of the input module I still didn’t have what I needed – typical. I pulled the PCB from the switch and modified it slightly to suit my needs – no big problem but you really don’t want to have to do this for anything but a prototype.

I didn’t think about it until I went to wire it up on the bench – to fully utilize this 5 button switch you needed 11 wires – 2 x 8 core CAT5 cables or 2 x 6 core security cables. Cable is relatively cheap, and if you’re pulling one cable, pulling two isn’t that much harder – but it still seems like a waste of resources. In the picture I have only hooked up the top 4 switches and the locator LED. 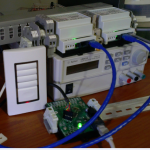 One solution is to add smarts to the switch so it does what you want by replacing the stock PCB with my own PCB design. This way I can add the CAN bus directly to the switch, use RGB LEDs and so on. I don’t really like the idea of buying something only to throw part of it away.

Another solution is to make my own PCB and fit it to another standard wall plate – this has its ownset of problems and will be the topic for another post.