I find when I’m coming up with my own hardware designs there’s always something else that would be nice to have, could be better,  or just different. Most likely it comes from having no fixed set of requirements up front. Perhaps the exact end application isn’t exactly known ahead of time as sometimes happens when trying to design generic items.

To this end I present the endless revisions of … the CAN input module .. over 7 years (yay for date codes on the PCB silk screens)

2006-05 CAN bus, 16 isolated digital inputs, DIP switch pull ups for each input, hardware debounce, unique ID chip, large aluminium enclosure, large 5mm plug and socket connectors. This version I threw everything in but its just too big and the cost was just too much mainly due to the enclosure but also the number of connectors. I never got around to doing the PCB end plates. 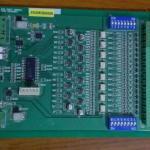 2006-11 CAN bus, RS485 bus, 8 non-isolated digital inputs, 8 open collector digital outputs, unique ID chip, small plastic enclosure, large plug and socket connectors. I think this one was modelled of the popular ADAM4050 module from Advantech. Simplify everything and reduce cost. It’s almost 1/4 of the size of the previous module and much less parts. Still just having the plastic case makes it ugly to install anywhere and look nice. Again I never got around to doing the PCB end plates.

2012-10 CAN bus, 16 non-isolated digital inputs, DIN rail plastic enclosure, screw terminals for inputs and RJ45 for CAN bus. Skip forward few years, I guess sometimes you never get a project “quite right” and you just have to do another revision. This one got most things correct in my mind. Cheap to make, single purpose by removing the outputs, nice to install on a DIN rail and standard CAT5 for bus interconnect and power. The case has a nice recess for the label for all the relevant installation details which is handy.

2013-04 CAN bus, 16 non-isolated inputs, the first 8 can be optionally configured as analog inputs, internal pull up or pull down jumper for the analog inputs, DIN rail plastic enclosure, screw terminals for inputs and RJ45 for CAN bus. 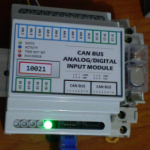 Its 2014 and surprisingly I can’t think of anything to add feature wise, but that doesn’t mean there isn’t something else … that can be a topic for another post.

One thought to “Endless Revisions”